Side Sinks its Teeth into London-based Action RPG 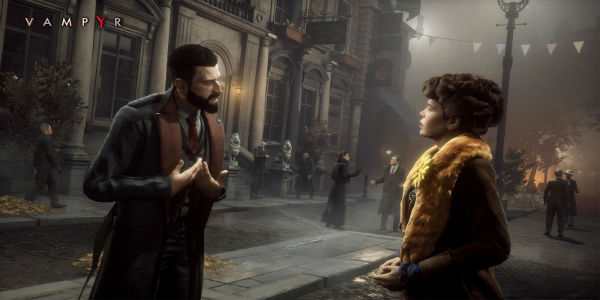 June saw the release of Vampyr, developed by Dontnod Entertainment and published by Focus Home Interactive. This action role-playing video game gives players the opportunity to embody a vampire in Victorian London.
Being based in Central London, amongst protagonist Jonathan Reid’s vampiric stomping grounds, we couldn’t wait to get our teeth into casting, directing, recording, and post production for the game. The cast is a fantastic collection of British talent who, when not voicing games, are in film, on the West End & Broadway (My Fair Lady, Dirty Rotten Scoundrels), and in top television series such as The Crown, Versailles, Downton Abbey, Luther, The Night Manager, and, of course, Dracula.
The voice production has received rave reviews, including:
Everything is extremely well voice-acted, in my opinion comparable with the very best work from BioWare’s Mass Effect and Dragon Age series.  – Polygon
…the actors’performances are so darn good. Dr. Reid is played by Anthony Howell, whose low, gravelly, round voice is an utter delight to listen to… -Den of Geek
… Vampyr boasts a consistently enjoyable, occasionally thoughtful script, with fine performances to match. Its cast of Londoners is a diverse cross-section of classes and cultures, each one with its own distinct story to tell. – Paste Magazine
These are characters whose lives are hanging by a very loose thread as you decide their fate…Their threads are interesting and the voice performances are the final stamp on their impact.  – Shack News
…the voice acting is terrific, with Reid's sinister, well-spoken manner proving a particular highlight. – Evening Standard